WS4D-jCoAP is an implementation of the Constrained Application Protocol (CoAP) for Java. CoAP is an exciting emerging protocol defined by the IETF CoRE WG, which is a RFC – Proposed Standard. To put things short, CoAP is supposed to create an alternative to HTTP for RESTful APIs on highly resource-constrained devices. While HTTP usually bases on TCP, CoAP defines rudimentary reliability features so you can run it on UDP and therefore save a lot of protocol overhead that inherently comes with TCP.

Now that you have an idea of what CoAP is (if you hadn’t already) we want to share our latest efforts on implementing CoAP. Until now WS4D-jCoAP has grown to be a complete CoAP draft 18 implementation of the client and server side and it is still evolving.

If you are curious right now or want to support us, check out the gitlab repository. Have fun!

The next step towards Web services in 6LoWPAN networks: SOAP over CoAP

Since the movement towards the Internet of Things and Smart Objects is gaining in momentum more and more, WS4D is proud to contribute to this field. Therefore an Internet Draft is published in the active IETF CoRE working group, describing an approach to bind SOAP to the CoAP protocol. Since CoAP is currently in draft state, the SOAP-over-COAP is it of course also. Nevertheless, contributions and feedback to the draft are more than welcome. Find the draft at http://tools.ietf.org/html/draft-moritz-core-soap-over-coap.

Posted in General | Comments Off on The next step towards Web services in 6LoWPAN networks: SOAP over CoAP

The University of Rostock exhibits on the embedded world in Nürnberg (01.03. – 03.03.2011) and promotes WS4D technologies to overcome the problems of the heterogeneous hardware structure with advanced cross domain solutions. See the “Internet of Things” and make your first experiences with WS4D. We will present you: 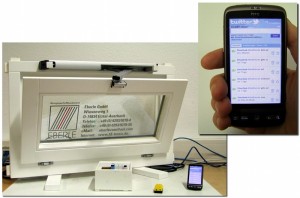